Every year, LSI Architects packs its bags and visits a new place to experience the architecture somewhere else in the world. This year, our travels took us to Amsterdam.

Partner Ben Goode said “This was the fifth annual LSI trip, and the second year in a row that we have travelled to Europe. These trips are hugely valuable for us, and give the team the opportunity to experience some wonderful architecture in other places, both for learning and for inspiration. Not only that, but spending time together outside of the office environment is great for everybody and only improves the already excellent relationships we have with one another.”

After a somewhat early start and flight, we arrived in Amsterdam with a visit to Forbo first on the agenda. Forbo are a leading global player in the production and distribution of floor coverings that include linoleum, vinyl and carpet and they hosted factory tours for the LSI team to show how their products are manufactured.

“It’s fascinating, and very important to come and see the products we are specifying and how they are made so we can better understand the product and its attributes” – Architectural Technologist Jordan Amstrong.

From Forbo, the team visited the Anne Frank museum for a tour of the 17th century canal house in which the Frank family hid from Nazi persecution. “The visit to the Anne Frank museum was very humbling, and a very moving experience. There are parts of the tour that are difficult to see, but a quote on the wall from Otto Frank, Annes father, read “To build a future, you have to know the past” which reinforces how important it is to understand the events that occurred.” – Brand and Marketing Manager Karl Brooks

On Friday morning, we were treated to a fantastic architectural tour of the city via the canals, sailing past the beautiful Amsterdam canal houses and through the Harbour past the EYE museum. A photo from Danny Owen from our trip along the Amsterdam canals. Another fantastic shot from Danny Owen from Friday’s trip along the canal. Voted the Best Photo of the trip, Associate Partner Peter Courtney’s shot of the windows on a block of Amsterdam flats.

“We travelled from the traditional old town (Centrum) via the Westerdoc to the new developments in the eastern docklands on Java and Borneo Islands, sampling the varied contemporary interpretations of the canal house along the way, before a well-earned lunch at the Harbour Club.” – Architect Richard Bassett.

In the afternoon, it was off to Museumplein for a guided tour of the Rijksmuseum. The Rijksmuseum displays over 8,000 artistic and historical objects, including Rembrandts ‘The Night Watch that tell the story of 800 years of Dutch history, from the year 1200 right up to the present. 375 million euros was spent on 10 years of work on the renovation of the museum, with the two inner courtyards, which were added in the post-war years, broken open, creating a two-part Atrium linked by a passageway. This restored the interior to its former state, as was intended by the original Architect, Pierre Cuypers.

“As part of the renovation to the Rijksmuseum, new internal courtyards open up and lift the museum from the 19th and into the 21st century.” – Architectural Assistant Joseph McKibben This photo from Peter Courtney shows the work to the ceiling in the Rijksmusem, completed by Spanish Architects Cruz and Ortiz. Julian Steel’s Photo of the LSI Team outside the Rijksmuseum

On Saturday, we were guided around the EYE museum. The EYE building houses 37,000 films and was designed by Delugan Meissl architects, also the practice behind the Porsche Museum in Stuttgart which we saw on last year’s trip. Externally, the building appears to be in motion with an uneven and random form that stretches along and around the corner of the IJ Lake.

“I thought that the interior spaces were impressive, with fine details and great use of a simple palette of materials. The volumes worked very well forming an interesting and logical series of spaces. After being initially suspicious prior to the visit of the EYEs resemblance to the Porsche Museum in Stuttgart, it was nice to see the building work well within its own site and programme.” – Architect Ben Wall A view of the EYE from the IJ Lake, photo from Julian Steel A closer view of the EYE, the Dutch Institute of film and moving imagery. A shot of an LSI Group from above, inside the EYE, showing the calming interior. Another shot showing the interior of the EYE from Peter Durrant.

Our next stop was a very interesting visit to the 3D print canal house to learn about 3D printing in Amsterdam. Here we saw a KamerMaker, a transportable 3D printer which translates from Dutch as “room-maker”. The KamerMaker takes computer-drawn plans are used to make exterior walls, ceilings, parts and furniture, by mixing plastic and wood fibres. Pieces are assembled on site like a huge jigsaw with steel cabling used to stitch elements together.

The final stop on our trip to Amsterdam was a visit to the Beurs van Berlage, the 1903 Dutch stock exchange building in the centre of Amsterdam.

“The building is a seminal work, as it changed conventional thinking and this cemented Berlage’s reputation as the” Father of Modern architecture” in the Netherlands. Berlage grew up in an academic family with a social responsibility and this influenced his belief that although the function of the building is to do with finance, the building should still reflect a modern inclusive democracy.

The simple asymmetry of the main façade with the corner tower was a shock to many, when it was unveiled in 1903. Some considered the elevations to be austere and lacking in decoration but Berlage’s underlying principle was that form and ornament, should relate to construction and not to be applied.” – Design Director Peter Hughes Another of Julian Steels Photos of the Beurs, featuring a large, open plan interior, used as a trading floor until 1997. A group from LSI walking through the building, constructed in 1903. 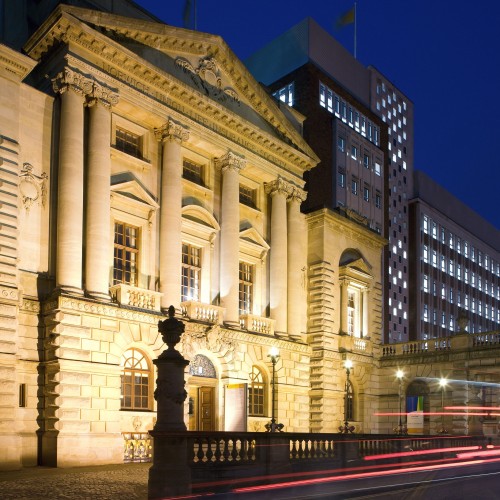